The Campaign Against Arms Trade (CAAT) is a UK-based organisation working to end the international arms trade. The arms business has a devastating impact on human rights and security, and damages economic development. CAAT is a growing NGO with a supporter base that’s expanding as destructive global issues linked to the arms trade become ever more obvious. CAAT Edinburgh is working in Scotland with the same aims. There are other groups active in Scotland working to end the arms trade too with whom we work.

There’s going to be lots to get involved in over the coming year, starting with our Planning/Strategy day in January to creative campaigns throughout the year highlighting the use and misuse of Scottish-manufactured arms in conflict zones. We’ll be pushing for parliament, councils and universities to stop investing in the arms trade, and running sessions in schools about peace. We’ll also be putting on lots of fun skills-building sessions on communications, campaigning, non-violent direct action and more!

And fantastic news!! We have now secured funding from Joseph Rowntree Trust and others for CAAT Scotland Coordinator and Andrew Smith, Media Coordinator for CAAT UK, has moved up from London and is now living in Glasgow!

This is a bi- annual arms fair, the largest in the world, held in London. The CAAT coalition of peace groups campaign, protest and blockade over a week to stop government subsidies, corruption in the industry and arms sales. Once again, CAAT Edinburgh were active. We ran 3 workshops in preparation: ‘How we win’, ‘Preparing for DSEI’ and ‘Non Violent Direct Action’ (NVDA) training. Then we were ready to go to London and make our voices heard!

Leonardo, the arms manufacturer, get into run sessions in schools, under the STEM banner. We presented a counter Peace session for schools, in June to an Edinburgh secondary school. We are ready to do more! Any schools interested please contact the CAAT email below.

John Scott, Ayr MSP hosted a reception for arms companies at Holyrood in September. Edinburgh CAAT were there to protest this undemocratic lobbying. 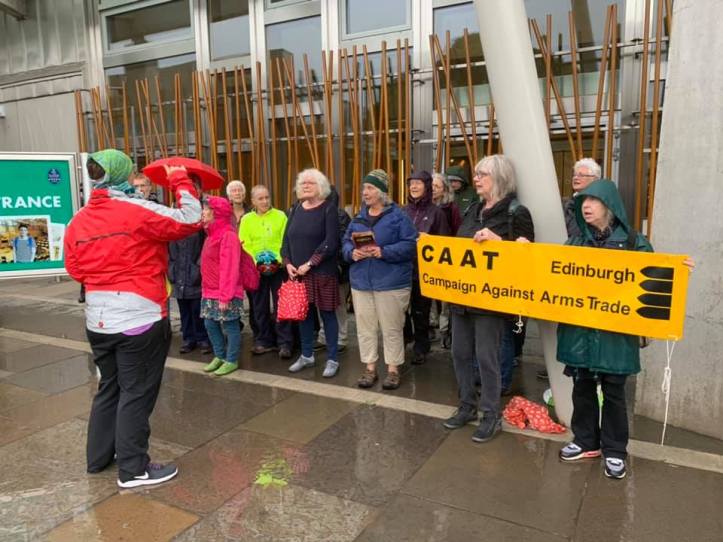 Scottish Enterprise, Glasgow has allocated up to £10 million to arms manufacturers. CAAT Edinburgh was there with others to object to this use of public money

Kate Nevens is now on CAAT UK steering group which meets every 3 months and all staff and the board of directors’ attend. Mark Bitel of Edinburgh CAAT has previously carried out this role and has done a terrific job of it for 7 years.

This site uses Akismet to reduce spam. Learn how your comment data is processed.